40+ pages of tips and examples to make your online retrospectives a success. 100% free.
Get the Guide
< Back to Neatro's Blog

Introduction to the Agile Retrospective: the Why, the What, and the How 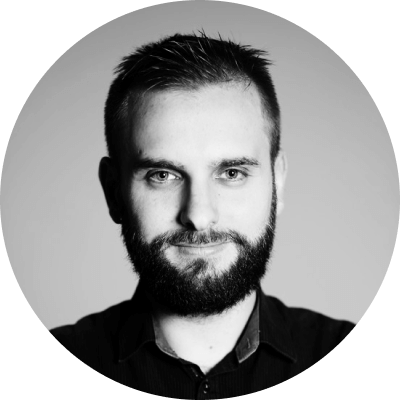 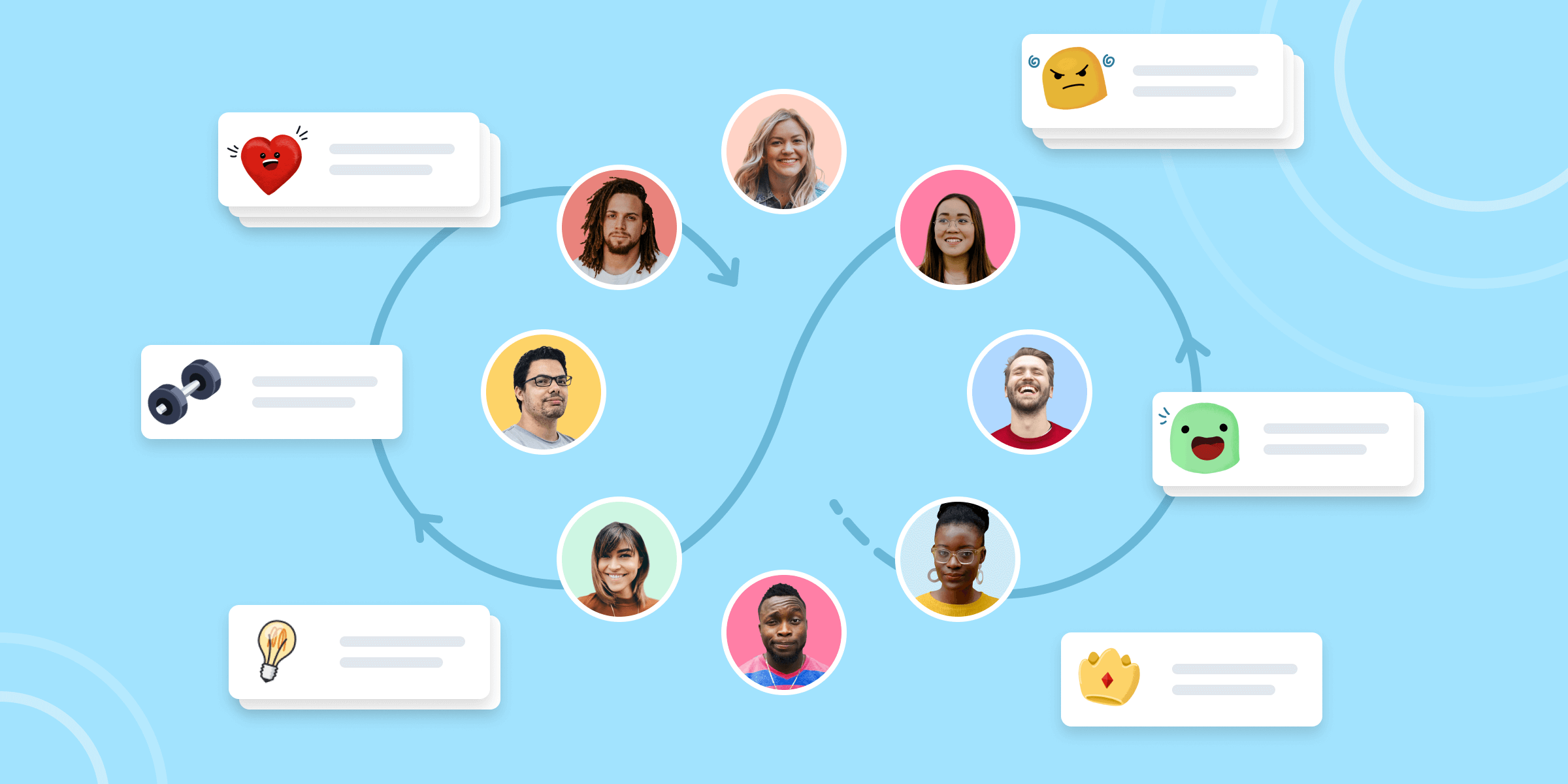 All right, but what is it really about? What's the point of having retrospectives? What format should I use? How often should I do "retros" with my team? Does it work as well in a remote working context?

If you're asking yourself these questions… you've come to the right place. In this article, we will try to understand why retrospectives have become so popular. Then we will see how you could implement them into your team's routine. Let's go! 🚀

Origins and popularization of the Agile retrospective

Radio stations repeatedly air Wannabe by the Spice Girls, while #TeamNotoriousBIG only swears by this hit called Hypnotize. Let's all meet halfway and treat ourselves to Daft Punk's title Around the world.

Alistair Cockburn, meanwhile, was probably quite busy that year.

In his book, Surviving Object-Oriented Projects, Cockburn informally described how working incrementally and regrouping after each increment could help project development.

In 2001, Cockburn further developed his concept and even gave the first name to this famous-to-come team meeting, "reflection workshop." In the process, he contributes to the Agile Manifesto's birth (of which he is a co-signatory). Here’s a key part of the Manifesto:

“At regular intervals, the team reflects on how to become more effective, then tunes and adjusts its behavior accordingly.”

From there, the Agile movement is put into motion for good.

Meet Norman L. Kerth, a former professor at the University of Portland and one of the pioneers of agility. Still in 2001, Norman made a significant contribution to the popularization of retrospectives with the publication of Project Retrospectives: A Handbook for Team Reviews.

Simultaneously, the adoption of Agile methods such as eXtreme Programming or Scrum is gaining in intensity. The retrospective is spreading and helps thousands of teams engage in a game of self-inspection and self-adaptation.

In 2006, Esther Derby and Diana Larsen joined in and published the excellent Agile Retrospectives: Making Good Teams Great. This book has been propelling the practice of retrospectives far beyond the boundaries of software engineering.

A simple definition of the Agile retrospective

Let's start with the beginning. The retrospective is first and foremost about the team, made for the team, led by the team. It takes the form of a short and frequent team meeting. We will come back to its duration and frequency later on.

The retrospective is about looking back on past events in the last iteration, learning from them, and then collectively building an action plan to drive rapid and continuous team improvement.

“A retrospective is a chance for a team to reflect and learn from the past within a structured meeting. The main aim is to inspect the situation and adapt to the reality.”

Simply put, the purpose of retrospectives is to help teams improve continuously.

Traditionally, a retrospective would allow a team to reflect collectively on three key questions: "What went well?", "What didn't go so well?" "How could we improve?".

However, a retrospective is much richer than a simple answer to these questions. We'll explore several fun retrospective formats in a moment.

What kind of team should do retrospectives?

It's not uncommon to hear that teams don't have time for retrospectives. Since a picture is worth a thousand words, this one pretty much sums up the philosophy behind retrospectives: 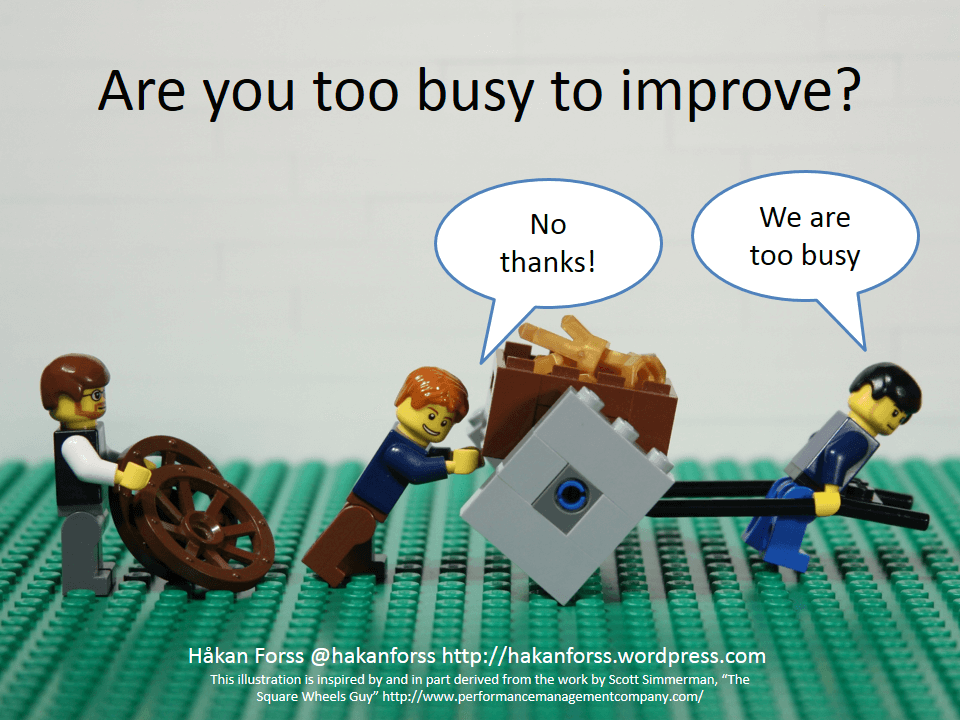 Besides, the level of maturity of a team should not affect the conduct of retrospectives.

What are the benefits of retrospectives?

There are many examples of the benefits of retrospectives. Since the team is very transparent during this exercise, its members can more easily discuss the challenges identified.

Let’s mention some of those gains:

How is a retrospective different from a classic team meeting?

Agile retrospectives are different from traditional meetings because their goal is to focus on a specific project with the intentions of: 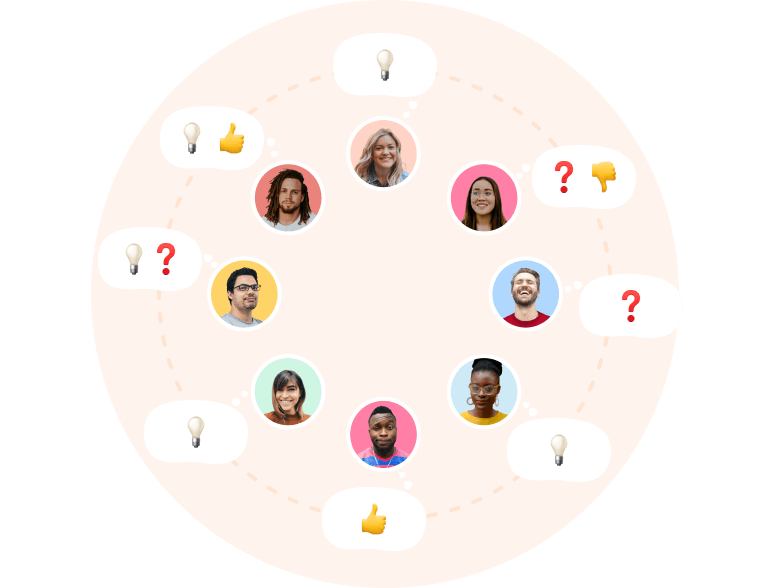 Who should facilitate the retrospective?

First of all, a team member should certainly take responsibility for hosting a retrospective. However, you might wonder who should have this responsibility, and the answer is… it depends.

Of course, a Scrum team will first and foremost rely on their Scrum Master and may request their help in facilitating retrospectives. An Agile Coach also has the experience and skills to perform this facilitation work.

However, in their goal to become self-organized, many Agile teams operate a continuous rotation when it comes to designate the next retrospective facilitator.

Thus, each member of the team will have the opportunity to design and facilitate their retrospective. This technique will provide the team with renewed activity choices and help avoid falling into a boring routine.

What are we talking about in a retrospective?

The Scrum Guide introduces the concept of the Sprint Retrospective as follows:

“The purpose of the Sprint Retrospective is to plan ways to increase quality and effectiveness. The Scrum Team inspects how the last Sprint went with regards to individuals, interactions, processes, tools and their Definition of Done.”

Here, we can note that the topics addressed during a retrospective are very diverse and continuously linked to the team.

In the case of our online retrospective platform designed for distributed Agile teams, we have identified 10 core team dimensions and offer them across our ready-to-use retrospective templates.

These dimensions typically correspond to the main topics covered in retrospectives, although this list is obviously not exhaustive:

How often should we have retrospectives? What’s the ideal duration?

Your team should hold retrospectives frequently to observe a sustainable impact.

We generally observe a retrospective at the end of each Sprint for a Scrum team, once every two weeks on average. Thus, the group quickly reassesses the impact of the action items it took on in the last retrospective.

Retrospectives are not meant to be meetings that go on forever. Again with the example of a retro every two weeks, expect a 90-minute session.

Here is another valuable clarification from the Scrum Guide : “The Sprint Retrospective [...] is timeboxed to a maximum of three hours for a one-month Sprint. For shorter Sprints, the event is usually shorter.”

In short, there is no particular constraint apart from favoring relatively short meetings and making retrospectives frequent.

What is an action plan, and how do you build it?

As stated before, the purpose of a retrospective is to help the team improve very quickly.

To do this, the team builds an action plan during the retrospective, consisting of one or more action items. There are endless examples of action elements as there can be so many topics covered in a retrospective.

Would it be possible to have examples of retrospective formats, please?

Of course, it is so kindly requested!

For the sake of brevity and efficiency, let's focus on examples of virtual retrospective activities - which can, however, easily be conducted in the office as well.

This format is one of the easiest to understand and use when starting out with the practice of Agile retrospectives.

The Ls stand for: liked, learned, lacked, and longed for.

Known for its great simplicity, the 4Ls has quickly become a classic retrospective format. We recommend using this activity to highlight both the positive and negative aspects of a project or an iteration.

Note that many Scrum Masters select this facilitation technique for recurring retrospectives as well.

This activity focuses on the positive aspects of your team’s experiences.

Combine the Team spirit responses with the comments from Ideas to determine which actions your team members want to take.

With the help of the Three Little Pigs fable, frame a discussion that highlights the processes that need to be improved, while celebrating what’s going well.﻿

Designed to invite team members to express themselves on a given set of themes, the Team Radar visually represents the team's strengths and weaknesses.

Remember the list of the 10 team dimensions mentioned above? You could use them on your radar to deliver a real-time snapshot of your team's health. This way, each team member would rate all of the dimensions with a score from 1 to 5 and then share their comments to give more context to their score choice. 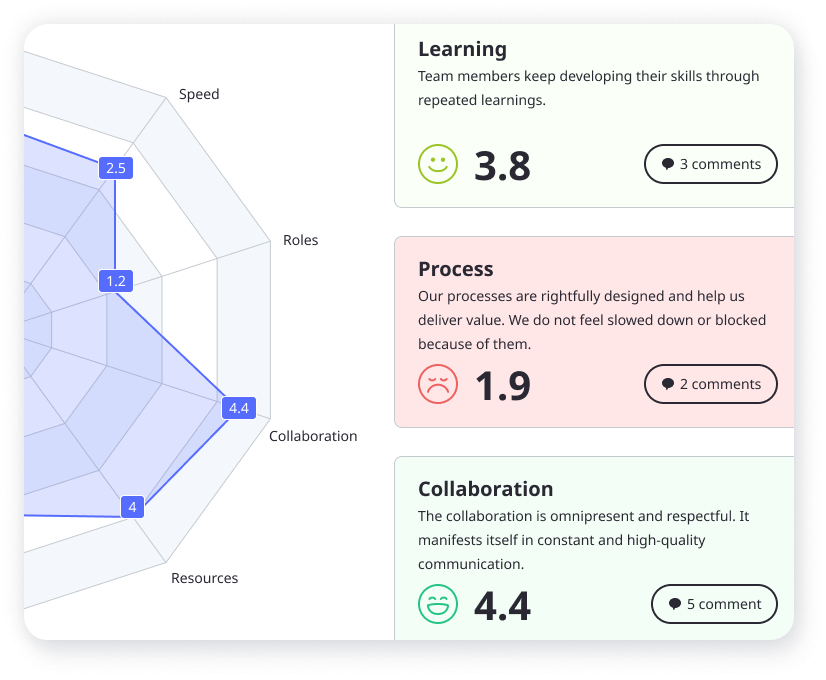 Note that you can try these 5 retrospective activities for free on Neatro.

Hey! I want some practical advice for my next Agile retrospective!

Now that we've covered the retrospective basics, it's time for you to prepare for your next team retrospective!

🎁 Bonus! A moment of philosophy: can we really speak of an “Agile” retrospective?

This section should please connoisseurs. 🤓

In the term "Agile retrospective," we tend to focus on both the ceremony (the retrospective) and Agility in its broad sense, don't we?

With this being said, can’t we see a pleonasm here? The very nature of a retrospective is fundamentally Agile, so why would we mind insisting on its Agile aspect?

As opposed to traditional project management methods (e.g. the Waterfall framework), Agile methods advocate adaptive planning, evolutionary development, early delivery, and continual improvement, and it encourages flexible responses to change. Thank you Wikipedia by the way. Thus, the retrospective looks like a direct means to articulate the values ​​of the Agile Manifesto.

Also, to our knowledge, there is no “waterfall retrospective” out there. Instead, we would find teams that combine a traditional project management methodology to a particular Agile practice.

But maybe "the truth is out there", as special agent Fox Mulder would think.

Putting an emphasis on the Agile aspect of retrospectives might catch the attention of teams that do not claim to be Agile. Those teams might simply want to explore new practices to observe quick benefits. Can we blame a team that cares about its continuous improvement and is willing to incorporate an Agile retrospective ritual into its non-Agile routine?

So, what can we think of this  “Agile retrospective” expression? Is it the right formulation? Or is it yet another shot from a group of Agilists wannabes?

We’ll all agree on one thing: team retrospectives quickly help any team improve.

Ready to do your first Agile retrospective with Neatro?
Don't miss the opportunity to help your team grow, start your 30-day free trial.
Try for free